The Grail Guitar – A new book by Chris Adams

Posted on January 12, 2016 • Categories: Catchall • Written by manager • View all posts by: manager 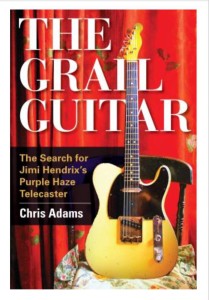 Rowman Publishing in the U.S. are to release a fabulous book in March 2016.  Written by our very own, Chris Adams, the brilliantly researched book tells the tale of a battered Telecaster bought by him in London in the early 1970’s.  He was intrigued at the time by the left handed tuners and was casually told by the salesman that the guitar had been brought in by one of Hendrix’s roadies.  Moving on some 40 years later, Chris & his friend Eric Barnett started to delve into the history of a missing Telecaster that was seemingly used by Jimi Hendrix on the recording of “Purple Haze”.  The detective story that Chris tells endeavours to determine if the guitar he owns was that Telecaster used by the late great man himself.  Throughout the trail, Chris weaves his own story  as a rock musician, making the book a “must read” for all rock fans & guitar aficianados.

Click on the link below to access the publisher’s web site which gives you further details and allows you to pre-order the book.

Watch out for further news on the official launch.