This decade saw the release of The Damage and Chris and I had a good few photo sessions with some great pics being taken and, later on, when the new live band was formed, we had some great sessions and some really atmospheric photos.  In searching for suitable locations for The Damage, we took some pics in a fire damaged church just around the corner from Chris’s house.  It has now been fully restored as a pub/ restaurant – The Church On The Hill.  Another place that we “broke into” was down by old dock buildings where we came across a brilliant building with old destroyed machinery that perfectly suited The Damage. Unfortunately, the negatives for these photographs are somewhere in a box , and finding a needle in a haystack would be an easier task.  So, what we have here are photographs of the photographs. 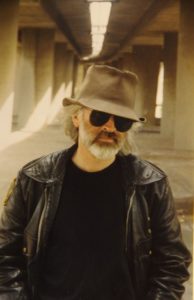 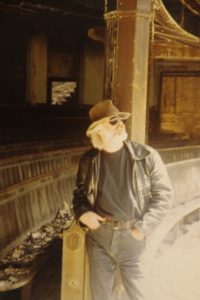 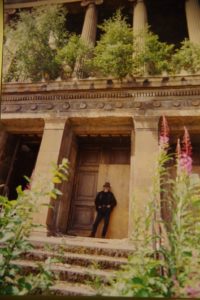 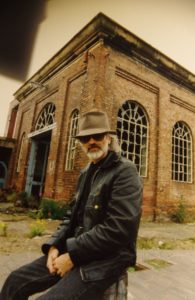 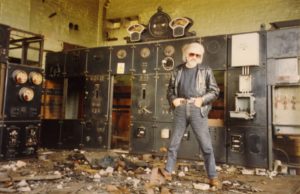 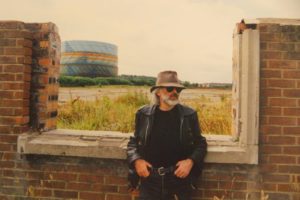 Doing stuff for the band that was formed in the wake of the Suicide gig in Germany was, of course, before digital and I remember that the bass player changed for a short period from Andy Allan to Steve Kane then back again (or maybe it was the other way round) which caused a problem with the pictures already taken.    I solved the problem by using a cut-out of Steve’s head (or maybe Andy’s) and transposed this onto Andy’s body (or maybe Steve’s), thus creating an up-to-date picture for the posters….

Anyway, we later re-visited the location at the rear of Kelvingrove Art Galleries in Glasgow and re-shot the pictures.  There were no bass players injured in the taking of these pictures. 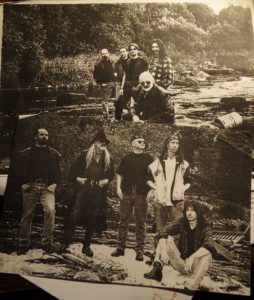 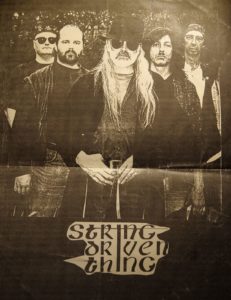 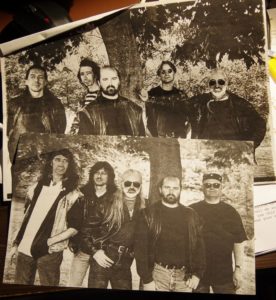 Chris was quite involved in writing a couple of books at this time and I had a few ideas of my own that I was working on but, despite our solo projects, we still met each week, had a few pints of Guinness and bounced things off each other.

One of the things that we did jointly was a project that Chris was working on entitled “Secrets In Stone”.  This was a study into the stone carvings on the buildings of Glasgow and Chris became a bit of an authority on the subject, giving talks to various local organizations.  Although I took a lot of pictures for this, we never did manage to get the project off the ground, although Chris did do a few talks on the subject to some local organisations.  What I would say, though, to anyone who lives in or visits Glasgow – look up.  There are some amazing carvings on many of our buildings.

Chris and I also recorded an interview that features as the closing track on the DI$CHOTEMY album that was released by Worldwide Records, based in Germany. I also took the cover photo for $uicide – Live In Berlin which was taken in woods on the Southside of Glasgow that were to be torn down to make way for a new motorway.  Protesters were living in the trees and were somewhat suspicious of our activities.  When they found out that we were taking pics for an album cover called Suicide, they became quite pleased with our choice of location.

The motorway was built.