ROBIN ADAMS has been working hard over the lockdown producing a new album that is receiving rave reviews from across the land.

He has also recently featured (12 January)on the excellent BBC Radio Scotland’s Roddy Hart Show where he took part in the Me and Three slot and chose three songs that had influenced him.  One of his own songs also featured.  It will come as no surprise that the first choice was “Travelling” by String Driven Thing.  You can catch the broadcast on BBC Sounds.  Rob’s bit is about 88 minutes in.

He has also been hard at work on the next in the series of his illustrated “Deep In The Mushroom Forest ” series.

Very pleased to announce that, after the tremendous success with his first book in his Deep In The Mushroom Forest project, a follow up is well advanced and this one is called “Shadow Play”.  I can guarantee that it will be as sensational as the first. If you are one of the lucky ones who bought the first book, you do not want to miss out on keeping your collection complete.   As the book and prints are strictly limited edition, it is clear that in a few years they are going to be very sought after and will be valued collector’s items.  In order to finance the project, a Kickstarter campaign is up and running to raise the finance to print the books. 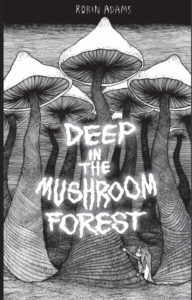 If you didn’t manage to get one of the first books, come on board now and enjoy the wonderful artwork and the beautiful story of this second. Don’t miss out on this opportunity by putting your pledge in now. just use the link below and help Robin bring this part of his project to fruition.  There has been a great pick-up on this and the target has been reached.  This does not prevent you adding to the success.  Check out the Kickstarter link below and grab the right to a copy.

One Day is the brand new album from Robin Adams.

Is This Music? -“Wonderful rich offering”

Blabber’n’Smoke – “A delight to listen to “.

The album is available on I tunes & Spotify.

Most of us are stuck indoors at the moment. Relax by listening to this wonderful album.   You won’t regret it.