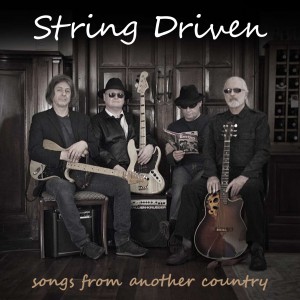 Title – SONGS FROM ANOTHER COUNTRY

“Shows the old ones are still the best ones” AmericanaUK

It all started in 1972 with the release of their self-titled album STRING DRIVEN THING when the band headed up by Chris and Pauline Adams burst on to the progressive folk-rock scene and took the music press by storm. Thirty seven years later and Chris Adams is back with a stunning new album of genre breaking material fronting a new band with the shortened name of String Driven yet still showcasing his distinctive vocal and song writing talent. The new album SONGS FROM ANOTHER COUNTRY has that definitive Americana feel and the ten stunning new compositions from the pen of Chris Adams prove he still possesses strong song writing credentials. Place To Lie is a superb opening track with a rock steady beat and the more mellow tracks such as Kelvin Way and Affairs Of The Heart display Adams’ signature wire and red wine vocal delivery, soft yet strong, emotive and meaningful.

The line up of String Driven comprises Dick Drake on all things percussive, bassist Andy Allan and guitarist George Tucker all of whom played on the critically acclaimed final String Driven Thing album MOMENTS OF TRUTH. Released in 2007 the album was described by Maverick magazine as “One of the sweetest Americana albums of the year.” A string of shows will be announced shortly and the album SONGS FROM ANOTHER COUNTRY will show both audience and music press alike that String Driven are a force to be reckoned with in the genres of Americana and folk/roots. This is the album that will bring the song writing of Chris Adams and String Driven into the 21st century gaining them many new fans.