Heartfeeder plus two – The Game

HEARTFEEDER plus two – The Game 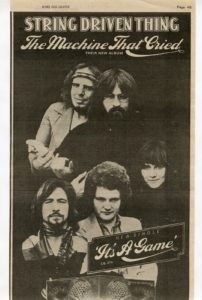 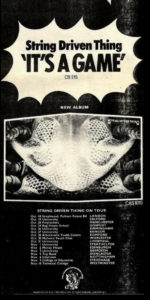 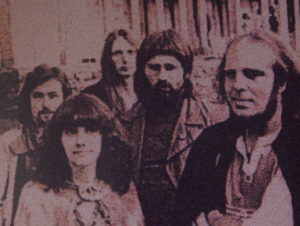 February 1973 saw the release of Circus as a single to coincide with the Genesis tour and we also appeared on Old Grey Whistle Test and the ITV kids programme Magpie.  I mentioned that I had decided to talk to Gail about getting a drummer, for whenever possible, I dealt with her rather than Fred.  As a result of our discussions,  I approached Billy Fairley, who I knew from Glasgow where he played with a band called Pram.  His first gig with the band was at The Cavern in Liverpool where he played congas.  This was kept a secret from Strat but, as a band, we decided that he was needed if we were to progress.

Shel Talmy was again chosen to produce the second album.  There was a really long corridor in his Knightsbridge flat, along both sides of which he’d hung his framed gold discs, one every eighteen inches or so. The effect of this long line-up on his new artists was salutary. You did not argue with Shel, because he obviously knew what he was doing and what he did, simply put, was to create the kind of conditions where he could capture a strong performance, rather than fiddle around interminably with sound. He was adamant that after six hours or so, you begin to lose that creative edge.  Thinking back, I realise how right he was, for on both albums we did with him, the recording process went smoothly and both came in well under budget.

While on the subject of recordings, I remember that we happened to stop by Olympic to pick up our gear one morning after a late-night session and lying outside the door was a pile of boxed half inch masters. As I climbed out of the van, one of the studio tape ops appeared with more of the same.

I glanced at the top box.  On it were the details of the session: February 22nd 1966, strangely enough, my first wedding anniversary.

I picked the box up.

Shit! This was the actual multi-track master of their first album! The guy reappeared with yet more boxes.

“Why are these being binned?”

He looked at me, askance.

“We can’t store them forever!”

Which I proceeded to do; the one beneath the String Band was Tom Paxton, so I took him for good luck, and a glance through some others told me that these were all sessions produced by Joe Boyd, [the guy who had directed that Hendrix film.]  Joe was a legendary producer who had made a strange connection with the English folk and folk rock scene. I say strange, because he was a New Yorker, so they were unlikely bedfellows. But as I went further down the pile, looking for maybe Fairport, or Sandy Denny, Arnie gave me a shout. We were behind time, and besides, these damn boxes were using up valuable space, so I left the rest of the pile lying there. Years later it occurred to me that somewhere near the bottom I might just have found out-takes for another of the albums Boyd produced, ‘Five Leaves Left’… Nick Drake’s debut album.

The tapes that we delivered to Charisma were not well received.  For a start, I had smuggled our drummer, Billy Fairley onto the sessions and it had worked so well that he was now a permanent member of the band.   Strat was not well pleased. Nor was he impressed with the doom-laden atmosphere that permeated the album.  My brush with death had thrown a dark shadow over my writing style and our violinist, Graham, had responded with a truly tormented pallet of chilling sounds. The overall effect was Gothic to say the least, but, as far as singles go, there were none in sight.  So, to keep the peace, and no doubt our recording contract, we went back into the studio and added some lighter, acoustic material, together with a new song called ‘The Machine That Cried’, which became the title track of the re-modelled album. Sadly though, the twelve minute closing section, a segued sequence built round Graham’s powerful instrumental piece, ‘The Sowee’, was cut and replaced by the new songs. And so, duly assuaged, Charisma now agreed to release it.

But when it did finally come out, the album was almost universally slagged, apart from one critic in the Guardian who went to the other extreme, calling it a work of genius.  I’m happy to report that time has tended to be kinder to it than the Music Press was back then and there are now several re-released versions out there with the original tracks included.

But, in the aftermath of the affair, Strat decided that henceforth we would have to demo all our material before being allowed to record them for real, no doubt with a view to finding the elusive single that would hopefully transform us from just another hard working outfit getting a solid response on the road into his latest shining stars. . This effectively spelled the kiss of death for the band and its ongoing creative process as anyone who ever had to use demo studios in the early Seventies will surely grasp.

By the Summer of ‘73, I was beginning to feel less and less like an aspiring star and more and more like a pawn in someone else’s mendacious game, a feeling that did not sit too comfortably with the persona I had been gradually developing both as rebellious teenager and now as a seemingly headstrong bandleader. So, when we were back in Scotland in July for a short break from the grind of touring, the song that suddenly popped out of my subconscious could hardly have been more apposite.

It is funny how certain memories seem to stay with you, sometimes for no apparent reason. Take the early June day in my sixteenth year, when I set out on my bike for the latest in the line of schools I had been sporadically attending these last two years. This one was a large, airy secondary which at least had the advantage of proximity, hence the bike, but the day was one of those perfect specimens of early summer that arrive all too rarely in the Clyde Valley, so instead of turning east at the top of our road, I headed west, for Loch Lomond.  An hour or so later, I parked the bike by a tree, and walked out onto a narrow concrete jetty. The sky and the untroubled surface of the Loch were both a perfect blue. There was not a soul in sight. With me I had a packed lunch and a book by Friedrich Dürrenmatt called ‘The Game’. I lay on my stomach, elbows on the concrete and slowly consumed both over the next few sunlit hours. Of the book, I remember nothing, save the title, but that perfect day remained with me, the feeling of solitude and freedom as heady now as the pure air was then.

We demoed ‘The Game’ in a studio in the centre of Glasgow run by a friend of mine called Brian Young.  Everyone agreed that the chorus was infectious, and in keeping with the music biz truism that says: ‘sell the hook as often as you can in the allotted three minutes’;  I did exactly that, repeating and repeating the chorus line ‘It’s a Game’ ad infinitum.  You get the idea!  I also discovered that using a combination of the Tele and the Epiphone produced a rich dark texture, which Graham offset by employing a bowing technique called automatic spiccato, an effect that lent the track an insistent rhythmic edge.  Back in London, Strat liked what he heard and told us to get right into the studio, but there was one problem.  It seemed that our producer, Shel Talmy was on holiday on some Greek island.  Undeterred, I persuaded Strat to let us go into IBC ourselves, with our regular engineer, Damon Lyon Shaw.

Using the captured performance technique that Shel had always favoured, we started the session at noon and six hours later the track was in the can, in this case not just recorded and mixed, but also mastered.  This last stage was crucial in getting the finished product to sound as close as possible to the final mix because it involved cutting the master disc, and IBC were one of the very few studios which offered this facility in house. Things could go badly wrong at this stage, as witness the story of how Hendrix sent master tapes of ‘Electric Ladyland’ across to the Warner Brothers cutting room and got back a ’78 acetate with ‘Electric Landlady’ on the label. But, as it turned out, this was the least of their mistakes, because the sound quality of this ‘master cut’ was seemingly diabolical.  So, having Damon there when the cut was being done was a huge bonus, and having brought all his production skills to bear on the day’s proceedings, he duly handed me a first generation acetate and I headed off for Charisma’s offices in Soho Square.  Strat was still there with some American executive who sat in on the listening session. I watched their faces as the song played, seeing the smiles start to grow.

‘I think you may have a hit there, Tony’, said the American.

‘Maybe, but I’m not sure about the title. ‘The Game’ makes it sounds like it’s about prostitution. Better we use the chorus line, ‘It’s a Game.’

In those days, 45’s had picture sleeves, and I had just the image in mind for this one.

Anyone who has ever seen the archetypal 60’s cult TV series ‘The Prisoner’ will remember the giant chessboard, and given the song’s subtext, I could think of no better place to have our photos taken. So off we set with a photographer in tow to the village of Portmerion in North Wales, where the external scenes in the series had been filmed. It was just as I remembered; narrow streets, brightly painted Italianate houses, replete with spires and domes, a quaint piazza;  in fact everything was there apart from the huge chessboard which it transpired had been a Patrick McGoohan inspired prop.  That said, the shots we did get were good of their kind, moody and atmospheric, but sadly, my political message was left undelivered.

And, as it transpired, the American was wrong, for ‘It’s a Game’ was not a hit, though it did receive a fair amount of airplay. Back in those days, just before the advent of Commercial Radio, the BBC still had a virtual monopoly on broadcasting, and they ran a two playlist system. If you were on the ‘A’ list, the DJ’s had to play your record. If you were on the ‘B’, then it was up to the individual Jock, depending upon his personal taste. Needless to say, some of the biggest beasts were Soul Men, which we were definitely not.

Note: The bass player changed around this time as you will notice if you compare the two photos.  Bill Hatje took over from Colin Wilson