Heartfeeder Plus Five – The Cover

HEARTFEEDER plus five – The Cover

For all of us who didn’t ‘make it big’ in Rock Music, there came a day when we had to turn our back on the long held dreamscape and re-enter the world of normality where the name of the game is finding some sensible way to pay the bills. For Andy Andrews, that day came in the winter of 1970, in a house with permanently damp carpets called Tir na nOg, when he finally decided that the uphill struggle was not worth the candle. Noel Redding was on the point of doing exactly the same on the day he turned up at Birdland. He had already decided that this was his last-ditch audition, and if things had not turned out the way they did, that Gibson of his would have been up for sale.

For me, that moment came back in Glasgow during the long hot summer of ’76, when I admitted to myself that unless I started earning, Pauline and our two sons would soon starve. So, following a lifetime’s logic, I decided to book a two-week holiday in a caravan a few yards from the coral sands of Arisaig on the West Coast of Scotland and worry about it when we came back.

If you were lucky, and back in the 70’s we usually were, the skies up in that part of the world would be a windswept cloudless blue, the days would last for what seemed like an eternity, and when they came, the sunsets would turn the Atlantic a deep blood red. It was during those two long weeks that I realised that part of the price I had paid for the dream I’d been pursuing for so long was losing the capacity to live in the now, to be at peace with the present. I had, in effect, been pawning it to pay for some potentially golden future. But now it was payback time, and even as we sat of an evening on the little beach with a glass of red wine, watching the orange disc slowly sink into the speckled ocean between the islands of Skye and Eigg, I knew that this really was a last hoorah, a final retreat from the fate that had been chasing me down since the day I ran away all those years before… to wit, getting a ‘real job’.

Back in Glasgow, I was weighing up my options, when totally out of the blue I got a call from an old acquaintance asking me if I’d like to run the Glasgow Branch of his Insurance Brokers. I told him I knew nothing of insurance, but he poured oil on this potentially troubling detail by explaining that the business specialised in taxi insurance, and that he could teach me all there was to know in the next few days. Ports can be very inviting places when storms loom, and this one provided financial refuge for the next year or so.

And as ‘real jobs’ go, it wasn’t so bad. I was, to a certain extent, my own boss, albeit connected by a very long leash to the London headquarters of the firm. I told myself I was merely, ‘resting’ as actors do, but then actors also act, and it was now palpably beneath my dignity to even think about returning to the pubs and clubs where I had once played. After all, they had been but steppingstones on my way up, so the idea of tucking my tail between my legs and swallowing my dignity never made it to the front page of the Ego Times. No, far better to write insurance cover notes in the small anonymous shop on a busy main road near Glasgow’s West End and write songs for the music publisher in the evenings.

But that happy anonymity was shattered one day when a tall bearded young man strode past the shop window, glanced in, then did a double take. Next minute the door opened, and Billy Connolly walked in.

‘What the hell are you doing here?’ he asked?

I smiled bashfully, for the last time we had spoken, he had been commenting positively on our recent slot on The Old Grey Whistle Test, then the ultimate TV Rock show. I mumbled something about being between contracts, and he spent the next twenty minutes or so regaling me with very funny stories of his latest tour in the States supporting Elton John, and having to wear two Big Banana feet.

The shop had recently been a cafe, and both kitchen and toilet were hidden by a green curtain, drawn across the width of the premises. No sooner had Billy disappeared behind it than a customer arrived. This guy was about half as tall as he was wide, in both senses of the word, and like many of our clients, he had absolutely no chance of getting taxi insurance anywhere else. I should add that these were the days of unlicensed mini cabs, which always seem to draw, shall I say, a certain type of individual, and we were the last chance saloon for many of these galoots. So, there I was, perusing his long list of driving convictions, when suddenly the green curtain flew open, and standing there in his archetypal crucifixion pose was The Big Yin! The startled driver gave a gasp and fell off his seat backwards.

One night not long afterwards, I arranged to meet an old school friend for a beer and so it was pretty late when I got home. Pauline greeted me with a big smile, not the normal response to an AWOL evening.

‘The Bay City Rollers have recorded ‘It’s A Game!’

I groaned, feeling myself begin to blush to the roots of my thick artistic hair. Surely this was some sick joke! I mean the Rollers were teeny bop puppets, and even though we’d emerged from Rock’s long tunnel of unreality with no money to show for all those years of gigging, at least we still had our artistic reputation intact! But now! But now…!!

This initial reaction, possibly fuelled by the evening’s intake of expensive French beer, lasted as long as it took me to start working out the sums that might be involved. After all, the tartan teen idols were selling tons of records, which meant we should be receiving lots of royalties. But, as it happened, ‘It’s a Game’, was not just their latest single, it was also the title track of their latest album, and when I got to see the cover, lo and behold, there were the boys themselves set up as pieces on a chessboard, just as I’d intended for us, four years before. 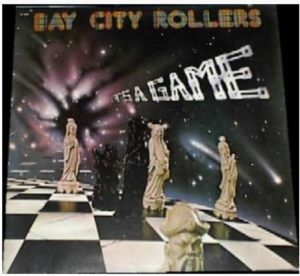 In their case, the Svengali who‘d discovered them, groomed them and put them into those strange tartan trousers was a chap called Tam Paton, who, as the Americans put it, has now passed. So, let us not speak ill of the dead. Let’s just say that the young men in the Rollers, like Noel Redding a decade before, found themselves with barely a penny to show for their big slice of stardom. For them, it seemed, the song had also been something of a political statement, and on their vinyl forty-five I found a little postscript that sums it up.

The message came courtesy of the man who mastered the single, George ‘Porky Prime Cut’ Peckham. He had this quirk of etching personal messages into the run-out groove of the vinyl master, and in this instance, the Rollers had obviously wanted to convey their feelings to their erstwhile ‘manager’, by getting George to engrave: ‘PS, Tam, It’s a Game.’  Fair dos to the Tartan Terrors, but weirdly enough, it transpired that George had actually done the cut of their single in the same room that we’d had ours mastered in back in ’73 because, in the interim, Chas Chandler had bought IBC, renaming it Portland Place Studios and in the process, had incorporated Porky’s own Prime Cut mastering facility. What goes round, as the Buddhists always say. But, as I was to discover for myself on a much smaller scale in the 80’s, recording studios can soon become money pits, so I imagine that’s why Chas soon sold out, to the ubiquitous Don Arden.

As for Pauline and me, well my 50% of the song-writing royalties from ‘It’s a Game’ allowed us to move from the top floor flat in Pollokshields in May ’79, to a fine Edwardian terraced house in the quiet, elegant suburb of Langside. But here’s a thing! Remember back at the start when we discussed ‘conflict of interest’ and I intimated that Charisma had been serially guilty of this same offence? So although it was done for the noblest of reasons, but if you recall, Marvin Gaye’s stint at Motown became a long extended nightmare that ended with him having to play piano in a Casino in the Belgian seaside town of Ostend just to stay alive. Now I’m no Marvin Gaye, but the problem with Gordy’s and Strat’s model is that if the artist falls out with the label, he has nowhere to go. So, when we were told to start demoing all our songs, there was no-one there to fight our cause because our ‘manager’ was in effect a paid employee of Charisma. In fact, he was no more our manager than I was his.

As for that 50/50 split on the songwriting [which means 50% to the writer, 50% to the publisher], well that was indeed the ‘industry norm’ back in the sixties when no-one knew any better, but by ‘72, any manager worth his salt would have got me a fairer cut. So why then did I agree to the deal? Well just like Noel Redding, five years earlier, each of the band was on a retainer, so for the sake of all involved, I didn’t want to upset the apple cart. Anyway, Charisma’s music publishing division was under the same ‘one roof’ set up so it was hardly in our ‘manager’s’ interest to haggle for a better rate for me! And there you have the classic ‘conflict of interest’ position, for in the end, he who pays the piper calleth the tune and as Strat owned the pipes, the pipers and the dancehall, so we all jigged to his Strathspey.

All that said, I still think of him really fondly, for he did possess real vision, and the retainer he paid us took away the anxiety that perennially pursues most young musicians. Most of what he did, then, he did for artistic rather than mendacious reasons, but in the final analysis, the whole system was only as good as its weakest link, which in his case was the former roadie he chose to run his artist ‘management’. To show you how bad a decision that was, when Genesis finally began to hit it big, they sent a telegram from the States to announce that they wouldn’t go on stage if the guy in question was in the building at Showtime. Needless to say, he wasn’t.