Today would have been Chris’s 78th birthday and to remember him, I attach a recording  of My Real Hero from 2009 when the band played at the What’s Cookin’ gig at The Sheepwalk Pub in London.  Hard to believe this was 13 years ago.   For the short promotional tour, Ronnie Garrity & John Bradley guested on bass & drums respectively while George Tucker & Robin Adams played guitar. 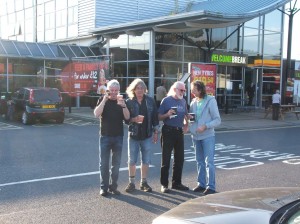 Although he was absent from this tour stop pic, I am pleased and proud to announce that Robin graduated with honours this week from Glasgow School of Art. His Dad would have been very proud of him.