DAY ONE – WEDNESDAY: As we left the sun behind in Edinburgh, we looked forward to more of the same in Bavaria. A beautiful red sky greeted us a we landed at Munich Airport and we were ferried to our hotel which turned out to be in the middle of nowhere. [More of Gasthaus Spirklhof later.] 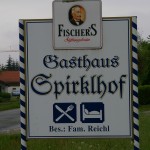 The advance party of Chris & Pauline had gone out the week before, combining a bit of recreation with an acoustic gig at Cafe Konrad, Vilsbiburg where the band had gone down a storm last year. Chester, Andy, Dick, Robin and Chris joined our organisers on the ground for a few Hellas & Weiss beers and then headed for bed where we slept in conditions so dark that we could not see our fingers in front of our faces. Robin got up during the night and got lost in the room.
DAY TWO – THURSDAY: The day started pleasantly enough, weather wise, without being wonderful and, after breakfast, we all, except Andy who had injured his knee, set off for a walk “in the black forest”. 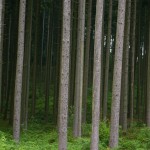 Much photo taking became the theme of the trip and a selection will be up soon on our latest photo video. 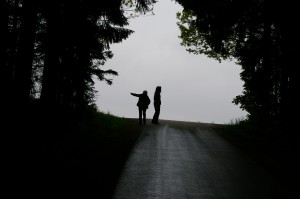 Life on the road involves a lot of sleeping in order to avoid heading for the bar. It was Father’s Day in Germany and Rob elected to sleep for his Dad before heading to Bilsbiburg for the evening’s gig. The weather had become quite cold & windy but a good crowd turned up to enjoy a set from Dr John & The Separators then String Driven provided two storming sets in the converted bowling alley. 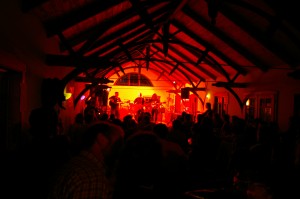 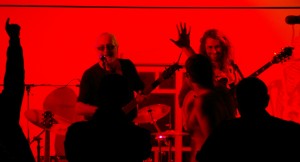 Whilst most of us headed back at a reasonable hour, Andy & Dick decided to party and paid the cost with an expensive taxi ride back to the hotel. 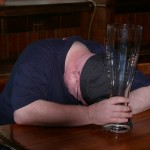 DAY THREE – FRIDAY: Breakfast this morning was a bit barren & staff were thin on the ground. Chester went for a stroll but returned quickly as the rain started to fall. On his return, he found the door of the hotel locked. Luckily another door was found to be open but he was told in faltering English that the doors would be locked till 5pm…….Prisoners…… 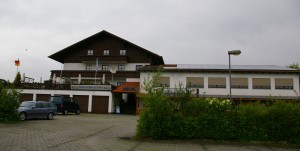 There is only so much sleep you can have in one day ( Robin excepted). At lunchtime, we realised we had no food so an escape committee was formed and we dug a tunnel from the foot of the fire escape stairs to beyond the kids’ playground – Ok, I’m exaggerating. We actually found a door that opened from the inside but unfortunately didn’t from the outside. Chester is, however, not tour manager for nothing – well, he is actually… but, anyway, he had anticipated this might be the case and waited behind the door as it shut. Robin then dropped the room key down through a grille and had to retrieve it. It was like a scene from “I’m A Celebrity” as he clambered down into this hole in the ground with giant spiders all around him. Rob & Pauline then headed for the local shop (the only other building in the vicinity). Chester waited behind so that the escape route could be re-opened. They were away was so long that he was nearly calling Interpol to investigate. He had forgotten that Pauline and shops means time passes slowly. 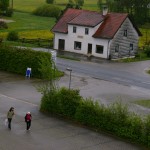 They eventually returned with some food which enabled us to survive the afternoon. By 5pm, we were all so stir crazy that we asked to be taken to civilization and Hump, the promoter of the previous night’s gig, provided us with some wonderful food from his restaurant Thai Brau. 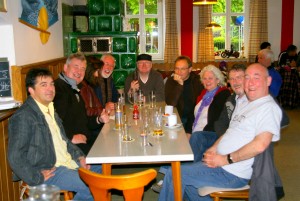 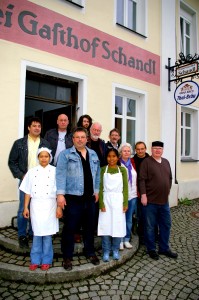 Friday night’s gig was in Wolperdinger, near Jenkofen, but the local Bavarian population were seemingly all hungover from their Father’s Day celebrations – it’s a big thing over there- so sadly many of them failed to turn out for what proved to be a fantastic gig in a great venue. 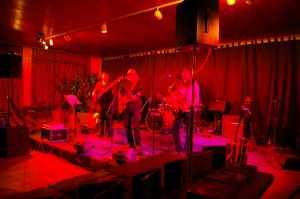 Upon returning to Gasthaus Spirklhof in the wee small hours, we found the door locked. At which point it was discovered that the room key opened the outside door. If only we had know this earlier!!
DAY FOUR – SATURDAY: The weather didn’t improve so we headed for Vilsbiburg for a photo shoot, some food and a few beers. 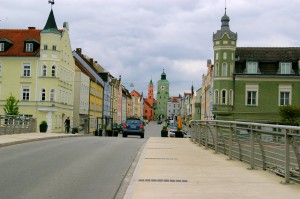 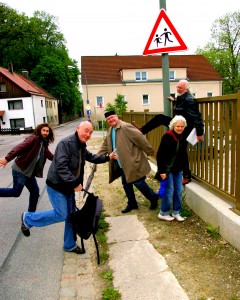 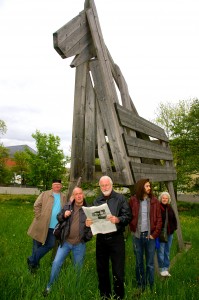 We then headed for The Foggy Dew, but instead of playing in the concert hall upstairs, we were transferred to the bar, due to a local biker festival with live music. Although this initially dampened enthusiasm, it certainly didn’t show once the band started. After a good 45 minute first set, they launched into a mammoth 2 hour second set. With the gear set up in a corner of the room and around a stove (which was on), String Driven really rocked to the delight of the small but vociferous crowd. 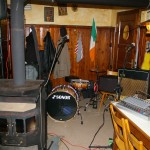 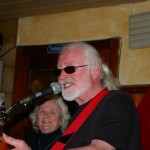 The flowing beer from the taps helped lubricate the band and after a rousing encore, the party continued much to the amusement of Chester & promoter John but not to Pauline who wanted home to her bed. It took half an hour to load the gear back in the transport and another two hours to get the band out of the pub.
DAY FIVE – SUNDAY: The sore heads in the morning became much worse when we heard that the volcanic ash from Iceland had filled the airspace and our flight home was cancelled. 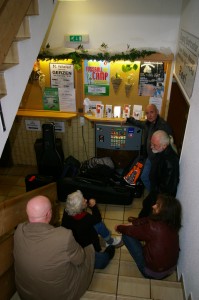 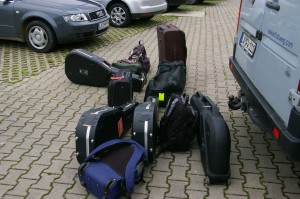 We tried to get our flights changed online, without success and by early evening decided that a trip to the airport might be the best thing. John drove Chris & Chester to Munich where a transfer of flights proved to be both painless and painful. As a chap with a parachute on his back – he didn’t look that nervous – acted aggressively towards the man on duty who had his Halloween mask on, we were served by a lady with a similar mask. After our reasonable approach, our flights were changed to Wednesday. The whole exercise took five minutes. A pain that the website didn’t work and also a pain that German keyboards are different to ours. Qwerty becomes qwerz…. I don’t know why! Oh, the guy with the parachute was still arguing. After returning to Vilsbiburg, we crashed at John’s for the night
DAY SIX – MONDAY: We all should have been back at work but instead took a trip to Landshut on the train. 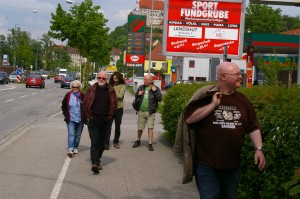 We wandered around, took some photos, drank some beer in a beer garden with the most wonderful urinals – they had a mini football pitch and set of goals. 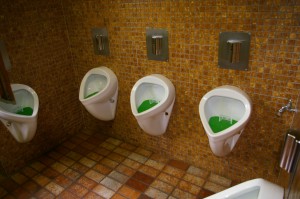 We all managed to have our own Golden Shot. 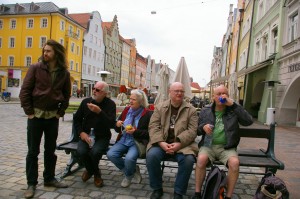 Some alfresco food was consumed before returning to Vilsbiburg where arrangements had been made for us to stay at a pension called “Heidi’s”. It was ideally equipped with its own bar/ restaurant where we all got suitably pissed. 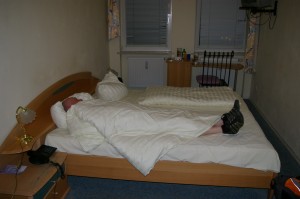 After establishing that our waitress was the said Heidi, Chester found it very amusing to pipe up…. “Heidi…..Hi!!!”
DAY SEVEN – TUESDAY: A stroll around Vilsbiburg took all of one hour and, as the rain had started, Chester, Chris , Pauline & Rob decided to head to Salzburg which is, of course, in another country – Austria to be precise. 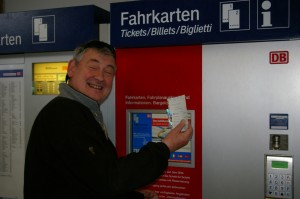 A great value train pass allows up to five people travel for a pittance. Salzburg is a beautiful city but sadly it pissed down. 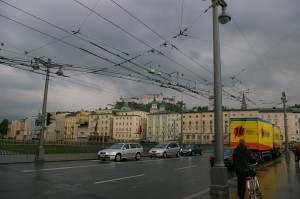 Chester managed to find an Irish bar and then had an excellent photo shoot with Rob in Mirabel Gardens which can be seen in The Sound of Music. 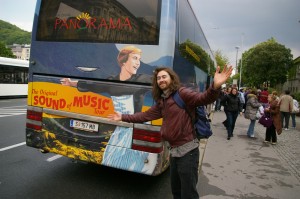 A few pints were scoffed upon return
DAY EIGHT – WEDNESDAY: After breakfast and checkout, the sun came out – but not for long. Chester, Andy & Dick took a stroll down by the riverside where, to amuse themselves, Andy decided to do his singing Jakey impersonation. 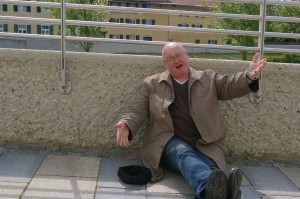 Only problem, as we found out later – he was doing it outside the mayor’s office. 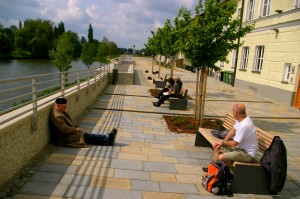 Further time was passed when a load of local birds approached the band looking for favours. Andy got some bread and fed the hungry ducks….. what did you expect? 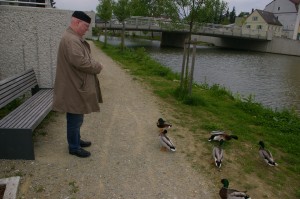 A few hiccups on the way to the airport did not prevent us from boarding our plane and heading back to Bonnie Scotland – three days late.
Look out soon for our photo video of the trip.