My involvement with the Chris and the band goes back more than 50 years and I have tried to gather together my memories of the good times we had together.

I first saw the band performing at Duck Bay Marina, Loch Lomond around 1969/70.  I stayed just up the road from the venue and occasionally did a shift there behind the bar.  Also behind the bar was the elevated stage area and it was the perfect platform for Chris, John & Pauline to perform their three-part harmonies interspersed with comedy routine.  At this time, I purchased the Concord album which was duly signed by the trio after correcting the identities on the back of the sleeve.  This very rare record is still in my possession. 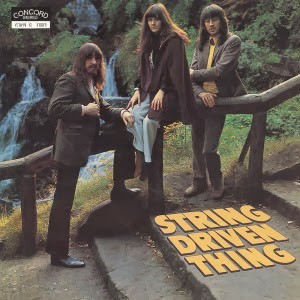 I started following the band and went to see them regularly in the various bars and bierkellers of Glasgow.  As a result, I became a “weel kent face” in the audience and, gradually, a friendship developed. As a committee member of Bearsden Ski Club, I was part of a team entrenched with organising an outdoor festival style event with music as part of a fund-raising campaign.  A good deal was available from the headline act, Mungo Jerry, by having two gigs on consecutive days, so we added a late-night concert at Green’s Playhouse in Glasgow.  This preceded a barbecue style event under canvas at a field in Drymen.   Interesting to note the ticket prices as 75p & 50p for the Playhouse gig which kicked off at 11pm.and £1 for the barbecue.  I well remember illegally postering Glasgow in the early hours. 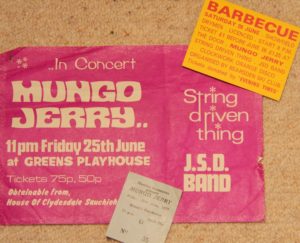 What no-one had told us was that Green’s Playhouse, which would later become the famous Apollo, would still be showing films prior to the gig.  I think it was “Psycho” that was showing, but I could be wrong.  Anyway, as soon as the cinema was cleared at about 10pm, the fastest ever set-up began for what was to become the last ever midnight concert at the venue.  There were various issues over the provision of a piano for the headline act, but these were overcome.

JSD Band and String Driven Thing performed excellent opening sets before Mungo Jerry took to the stage and rocked the place.  The gig was going well but the police were not happy about the likely finish time and the lack of night buses, so I was sent on stage with a note for Ray Dorset to finish for the night.  I crawled up to him sitting at his keyboard and, after opening and reading the note, he screwed it up, threw it in the air, stomped his feet and counted into their massive hit, “ In The Summertime”.  The gig finished eventually, and no-one was arrested, thankfully.  At least I can say that I have been on the Apollo stage.

The next night was, as already indicated, out in the countryside, but  I do not remember much about this one as I took an unbelievable headache and had to head home without seeing the gig.  I do remember a bunch of guys trying to sneak in without paying in the back of a big van.

Another memorable gig was the first time that Colin Wilson played with the band.   They were supporting The Dubliners in McLellan Galleries and I remember this being the first time that I had taken photographs of the band.  I have to say that these were not very good but the band and I did manage to enjoy a few pints together on the evening.

I called in on a regular basis at Chris & Pauline’s flat on the South Side of Glasgow and our friendship developed.  There were many times that I was the first to hear new numbers being tried out in the top floor flat and I remember being amazed at the sounds produced by Graham Smith on his violin as the new line-up rehearsed in Chris & Pauline’s lounge.  Chris & I returned to the close a few years back to shoot some video memories of their time there. After they had been signed by Charisma and moved to London, I only saw the band live once.  That was with Ducks De Luxe in a small London venue and it was a very early one featuring Billy Fairley on drums.  I was totally blown away by the new solid sound.

This was a long time before social media, but Chris and I managed to stay in irregular contact and, after the band broke up, or “broke down” as Chris put it, we re-established our friendship back in Glasgow, regularly meeting and getting involved in things together including, bizarrely, driving comedian Clem Dane around the West of Scotland in an attempt to perform at a record number of venues in 24 hours.  We also got involved in recording the same comedian’s song about Red Rum.  “Five times he ran, three times he won” was the “hook”.  Like the horse, the recording has never surfaced again.

Looking back to 1974 when the band broke up or, as Chris put it to me, “broke down”, Chris once told me that he lost his appetite for the whole thing after his collapsed lung and he felt like “part of a mechanical process that was being driven beyond breaking point”.  Chris hadn’t meant this to sound like a criticism of Charisma.  “Strat was a man of vision and integrity but, ultimately, he was just a cog in a much larger machine.”  Chris felt they were being driven by forces that were non-artistic and “It’s A Game was a jaundiced look at a musicbiz production line designed to churn out pap.”

When Chris & Pauline recorded their album as a twosome, they had taken up residence in a little English village called Steeple Claydon.  They laid down the tracks in Morgan Studios with Hugh Murphy behind the desk and top session musicians provided the backing tracks. I was lucky enough to hear the album at an early stage and the songs are delightful.  The album was later released by Ozit Records on coloured vinyl and is to be recommended. 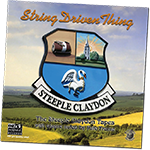 On Christmas Eve 1975, my first daughter, Taryn, was born and that night I found myself at Chris & Pauline’s flat in Glasgow erecting a train set and bike as Christmas presents for Chris Junior & Aaron.

Throughout the remainder of the 70’s, we met regularly and started trying to write a bit of comedy for fun.  Whilst we enjoyed the process, we were unsuccessful in getting anything performed. In later years, we were to expand this process.  You can find out more in the next episode.