As the eighties progressed, the royalties tsunami from ‘It’s a Game’ gradually dwindled to a medium surf wave and eventually to a trickle, and as it did, inevitably I was pulled by the Law of Brownian Motion towards the centre of Life’s wash hand basin, thence perilously close to the proverbial plug hole. Casting around for a new ‘career’, I accepted the offer of some multi track recording equipment as a pay-off for my current song publishing deal and somewhat against my better judgement, used it as a springboard to open a small ‘demo’ recording studio on the South Side of Glasgow. I say ‘against my better judgement’ because I have never really had an aptitude for things technical; but by this time my oldest son, Chris, was in his late teens and to my delight, had taken to the medium like Luke Skywalker to the lightbeam.  It should have been a partnership made in heaven, but unfortunately we were right at the cusp of the analogue, digital changeover, where amazing new tools and gadgets were appearing every month, and any studio without them was regarded as a no hoper. Unfortunately, these gizmos were all front loaded pricewise to pay for the huge R&D investment, so digital reverbs that sold a year later for around £200 were costing us over a grand apiece. In short, the studio proved to be my own personal money pit. Only it wasn’t my money. It was the bank’s. 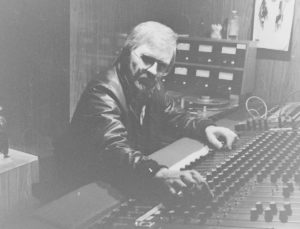 But never one to wallow for long in the mire, I decided to put my car on the road as a private hire taxi, and with this one action unwittingly disappeared down a plughole of debt that would devour the rest of that decade and then some. For a year or so, I was Jack the Lad, in the studio by day, driving the Volvo Estate [yes, that’s what I said] at night. But hovering over me, like Damacles’ shiny sword, was the coming tax bill which the Rollers cover of ‘It’s a Game’ had generated. So, finally removing my head from the silver clouds that had settled so comfortably round my shoulders since the night I first heard of said recording, I set off for London to speak to the music biz accountancy firm that was now the last link with my former self. But when I got there, I found the books and receipts I had been dutifully sending, all there waiting for me at reception in two red plastic bags. When I asked to see the accountant personally, he ushered me into his palatial office and said that if I’d care to write out a check for one thousand pounds sterling, he’d deign to get his minions to start collating the figures and preparing accounts, at which time I could pay the balance.

Back out on Baker Street with the cruel mid-day sun combining with clouds of bus fumes to all but suck the very air from my lungs, I struggled sweatily along to the first available public house, where I laid down the damned bags and ordered a pint of their best real ale. But hardly had I lifted the glass to my lips when from the jukebox came the sound of a soaring sax playing the timeless riff that ushers in the song about the street in which I happened to be sitting. Then came the voice, and in that moment all the terrible bile that had been building up in my life for so long came floating to the surface. Gerry had made it, and here I was with two red plastic bags and nothing but tax bills and a mounting overdraft to look forward to! Where had it all gone wrong, I asked myself, but unlike the bellboy who asked George Best that question when he brought the ordered bottle of champagne up to his room and found the current Miss World lying naked on the bed, I was not being sardonic. Somewhere along the way I had not only squandered what talent I had, but also the belief that I could ever recover it, and sitting there sipping at the pint, I thought of the last time I had seen Rafferty. If you remember, we had been regular drinking buddies in the late 70’s and Pauline and I had often gone out as a quartet with him and his wife Carla, on one memorable occasion to watch Neil Young and Crazy Horse rock the Glasgow Apollo with the quintessential version of ‘Hurricane’. With an electric fan on the mellotron blowing his long hair back, Neil looked like a man bent on heading into the eye of some personal psycho-storm, with that old Bigsbied Les Paul of his screeching its own form of madness… but I digress. The Rafferties had also invited us to their little terraced bungalow in Yoker, eerily just a few hundred yards from the phone-box where I’d met Carey Aitchison the day I ran away all those years ago. This had originally been Carla’s parents’ house, and a few years earlier, after he quit Stealer’s Wheel, they had been forced to come back here from London with their tails between their legs. Then late one morning as Gerry lay fast asleep in bed, his mother in law shouted up the stairs to tell him that there was some man on the phone calling long distance from Los Angeles.

‘Ask him who he is,’ said Gerry, rubbing the sleep from his eyes.

She was back a moment or two later to report:

‘It’s the President of A&M Records!’

It transpired that Gerry Moss, whom we met earlier in the Supertramp story, was calling to beg Rafferty to re-join the band he had formed with his boyhood friend Joe Egan, because the newly released ‘Stuck in the Middle’ was now soaring up the US charts and Joe had refused to mime the lead part because Gerry had sung it on the record. When it was pointed out to him by the record company that most people couldn’t tell their voices apart, he had shrugged and said:

So, Rafferty returned and, as he told it, him and Joe had a heart to heart about why Gerry had quit, and a couple of months later, the band broke up. 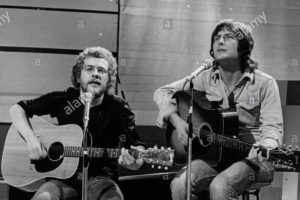 Upstairs in the dormer bedroom of the terraced bungalow, Gerry played me some of the demos he was making for his forthcoming album and having listened to the arrangements he had put together, I can say that if anyone doubts that he wrote that famous sax line, then they obviously don’t know the guy that I did. But a year or so later, serendipity came knocking when his then manager went burst and he and Joe Egan got the rights to their song publishing back. With ‘Stuck in the Middle’ already in the catalogue, they were able to do a new deal with Island Music, and with the ensuing six  figure advance, he and Carla bought a detached house in Kilmacolm, a very upmarket village deep in the Renfrewshire countryside, but with easy access to the airport and less than an hour’s commute from Glasgow.

It so happened that an old friend of mine, Jim Martin, had been to school with Gerry and suggested he come along with me next time we went out. This was cool with Rafferty so we met at the Bull Inn in New Street, a well-known Paisley watering hole. The bar was crowded so we stood in the middle of the floor, with Gerry on Glenmorangies, me on beer, and Jim, who had driven, sticking with one pint. Things were going fine till Gerry engaged a young man next to us in conversation. The lad was about twenty, but thin and almost tubercular looking, as if he worked in one of the mills that had made Paisley prosperous in the Nineteenth Century.

‘Don’t you know who this is?’ Gerry asked, indicating me. ‘This guy’s a famous Rock Star. He wrote that song about Glasgow’s holy stream, the Molendinar’, at which point he launched into the chorus of this non-existent song. All this was obviously well over the young man’s head and I was beginning to feel sorry for him, so I decided to call a halt.

But the youngster had never heard of them so I tried a different tack.

‘Well he was in the Humblebums too. Surely you know them?’

I laughed and gave Rafferty a little pat on the cheeks with both hands. His face clouded over and for a while the atmosphere changed for the worse, but as drink continued to be consumed, things lightened up as he and Jim reminisced about old school friends and foes.

After closing time, Jim offered to drive him to Kilmacolm, but he insisted on taking us to see a woman friend of his called Mamie, whose partner had been the well-known Scots folk singer Josh McRae, now sadly passed away. Mamie lived in the old part of Paisley in a large flat above a row of shops reached by a long staircase that ran directly at a forty-five degree angle from the street. When we got there a few people were already in the flat, one of them an American who asked us if we wanted some magic mushrooms. Rafferty was all for it and for once in my life I let peer pressure over-rule good sense. But I was a bit peckish, so decided to have mine on a sandwich. The next hour or so went fine, and I was pretty certain that I had happily missed out on whatever effect these particular specimens were meant to have, but unlike us carefree musos, Jim had work next day, so while he went off to fetch the car, we said our goodbyes and thanks to Mamie.

Standing at the top of the stairs, I gave her a wee peck on the cheek and as I turned away, Rafferty suddenly grabbed me in a bear hug and launched me backwards off the top step. I remember grasping his lapels as we careered down two dozen steps, tumbling at a rate of knots that should by all rights have broken at least one of our spines, but miraculously we both arrived at the doorway unharmed.  At this point I went berserk, calling him all the stupid fuckers of the day, but he just smiled, a little evil smile that said:

‘You shouldn’t have messed with me!’

The journey back to Kilmacolm was half an hour of stony silence, and for some reason Jim felt obliged to accept the invitation to see the new house. Inside, Carla was still up, and seemed to suss that something was amiss, so she sent her spouse and Jim to make coffee and asked what had happened.  I told her the story then took a deep breath:

‘Your man’s a psycho, Carla, and I’ll never see either of you ever again.’

She seemed genuinely shocked but at that point Jim and Rafferty arrived back with the coffee. A moment of small talk followed, till Carla said:

‘Gerry! You haven’t boiled the water.’

The fact that I was unaware that I was drinking cold coffee will tell you all you need to know about the power of mushrooms, but whether it was down to their supposed prophetic qualities or not, what I told Carla that night came true. I never saw either of them again.

But many years later I did bump into our hostess that night, Mamie, and asked her if she’d ever seen Rafferty again.

‘Only once,’ she said, ‘on a flight to Greece. I walked up to him and told him he could have killed you that night.’

‘Nothing. He just shrugged and gave me that wicked wee smile of his.’ 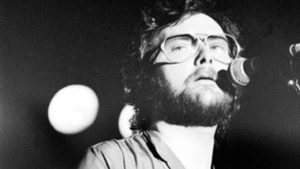