I remember after a sound check on one of the tours we did with Genesis, congratulating Mike Rutherford on their first ever Melody Maker front page, a head and shoulders shot of Peter Gabriel in a flower shaped headdress, not unlike the ones worn these days by Welsh Rugby fans.

He sniffed. ‘It should have happened years ago.’

While the Charterhouse boys were touring America, you’ll recall that in the mid 80’s I had put my car on the road as a taxi to subsidise the recording studio, and due to a strange succession of events which I will not go into, had ended up as a partner in the taxi company, legally known as a private hire radio system.  At one point, I actually found myself sitting round a table with a dozen strangers in a Government building in Edinburgh called New St Andrew’s House, helping to shape the model conditions for the upcoming piece of legislation that would license all drivers using such systems. Such are the vagaries of a life being made up as it goes along. But philosophising aside, this unexpected tide of events swept me mercilessly down a dark underground tributary from which it took over a decade to escape and even when I sold out my share in the company, I would still be forced to continue to taxi part time until I could get my life onto some more meaningful path.

If I learned one thing from the whole experience, it was that work was not really work if you enjoyed it. I had come to the point in the mid 70’s where I regarded playing music as work. This was partly to do with the nature of being a support band on big tours, where you were expected to do an hour, no more, no less.  We were in essence a jamming band, stretching songs out, eviscerating their form, rebuilding them on the hoof, always the servants to spontaneity. Once we began to lose that, we lost our raison d’être, because the alternative is the same old performance, with its serial, repetitive nature. At least, that’s the way I thought back then.  But now I knew different! Only if you had to drag yourself out of bed of a morning to do something you hate, could it really be called ‘work’, though even then, after more than ten years behind a wheel, there were lessons the job could teach you in the most unexpected ways.

Sometime in the that lost decade, I was out working one Sunday afternoon when I got a call to pick up a fare at a bar near the North Side of the River, habitually frequented by the gangster classes.  The guy who got into the car had a fresh Spanish tan and a typical hardman face.

This was a psychiatric hospital just outside of Paisley, maybe seven or eight miles distant. A good fare then, heading away from city traffic, so I set off south across the river with the stereo on just loud enough to discourage conversation.  Not that I’m anti-social but, anyone who says that life is short should try taxi-ing for a living. Believe me, it’s an extremely long career comprising the same endless Groundhog Day conversations that start to replay spontaneously in your sleep. So anodyne classical music was usually my best defence, but as it happened, not this time.

‘You know Bud,’ he volunteered. ‘I’m going out here to see the best Rock singer that Scotland ever produced.’

I saw his eyes narrow in the mirror.

‘What do you know about Jimmy?’ 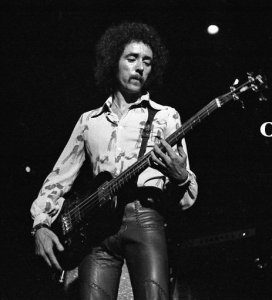 Fact is, everybody in the Glasgow Rock scene knew Jimmy. He was the bass player with Lulu and the Lovers, predictably ditched when she went solo, then bass player and co-singer with Maggie Bell in Stone the Crows; but for some reason he fell out with their main man, Les Harvey.  Then, not long after this last disappointment, Jimmy scored himself the gig of a lifetime as singer and bassist with Robin Trower, the ex-Procul Harum guitarist who had been heavily influenced by Hendrix.  Playing their late 60’s brand of heavy rock, he and Dewar were amongst the select group of high calibre players who had made the jump across the Pond to the Promised Land, and right through the 70’s, Jimmy was on that fabled circuit, living in LA, making lots of dough and mingling with the elite of rock.

‘He did a session for us way back,’ I said, trying to keep it simple, though it was true.  On the first demos String Driven ever did in ’68, I had brought in a friend, jazz guitarist Jimmy Mullen to MD the session, and he in turn pulled in Lesley Harvey on duet guitar, Jimmy Dewar on bass, and a last minute pick-up drummer when the one he’d booked slept in.  Sadly, the studio sound had been so bad that I never even picked up the tapes.

When we arrived at Dykebar, my fare invited me in. I wasn’t keen to go, but he insisted.  Inside it was like ‘One Flew Over the Cuckoo’s Nest’, without the American pzzazz. We’re talking about a glass fronted lock up ward, with guys roaming around like zombies, and white coated nurses who looked like they enjoyed a drink in their off-duty hours, and no wonder. If you weren’t insane when you arrived here, then with the medication you soon would be.  They extricated Dewar from the ward and took us along to the canteen.  He did not look well, nor was he what you would call an easy conversationalist.  My fare did his best to coax something out of him then took the easy option and went off with one of the attendants to buy him a Chinese carry out, leaving me alone with him and one other nurse.

I asked her if he maybe had a guitar. She disappeared and returned with a battered Spanish job with steel strings and a broken neck. So that would be a ‘no’ then.  Jimmy was smoking the cigarettes his friend had left him down to and into the filter. His face was gaunt, and as he drew in smoke, his cheeks became dark concave hollows.  Although he had been in my studio in the mid 80’s, he didn’t know me.  I mentioned a few names of friends we had in common.  He didn’t seem to recognise any of them.

‘How about Davey Pattison?’ I asked. 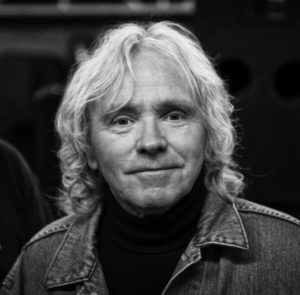 He looked up from the inch of cigarette clutched between nicotine stained fingers and for a moment the dimness in his eyes seemed to lift.

‘That bastard’s got my gig!’ he said.

I knew the first part of that story, for years before, Jimmy had told me how out there on the road they had shared a bill with the hard rocking Montrose, whose guitarist, Ronny of the same name was bemoaning the fact that he couldn’t find a suitable replacement for singer Sammy Hagar, and asked Jimmy if there were ‘any more like him back in Bonnie Scotland’. Jimmy had laughed and gave him the phone number of his old buddy, the gravelled voiced Davey Pattison, then languishing in total obscurity in Paisley. We had shared many a bill with Davey in the early 70’s, and a great singer he was, but whereas we got the break with Charisma, he had continued to plod on in a succession of pub bands in and around Glasgow.  But, as they say about laughing last, Davey got the call from Ronny and off he went to the West Coast, never to return, and a few years after Jimmy quit the road and returned to these shores with a nice wee nest egg that should have set him up for life, Davey got another call, this time from Robin Trower, and as I understand, he’s still his singer.  So, in a way he did have Dewar’s gig.

After we left the hospital that day, Jimmy’s image kept returning. It just didn’t seem right that a guy so talented and so well known in the Glasgow rock world should be languishing in such a place. In the next few weeks, I spoke to some of my muso friends, suggesting the idea of a benefit gig, but gradually time began to dilute that image of his sunken eyes and slowly he dropped off my priority radar. Then a few months later, Lady Luck dealt me another strange little hand when I got a fare by the name of Dewar going from Glasgow city centre to a council estate in a place near Paisley called Howwood.  The woman who got into the cab turned out to be Jimmy’s wife and when we got talking, I told her that same story.  She smiled sadly and explained how he had gone into hospital for a simple operation to remove a blemish and had somehow been tragically starved of oxygen during the process. For a while they had tried to care for him at home, but according to her, he was forever setting the bed on fire.  I suddenly got that image of the cigarette gripped in his fingers, him smoking it down to the tip.  When we reached the house, she gave a little rueful laugh as she stepped from the cab and said to me.

‘If I ever get round to writing my life story, know what I’m gonna call it?

“From Howwood to Hollywood …and Back!!”’