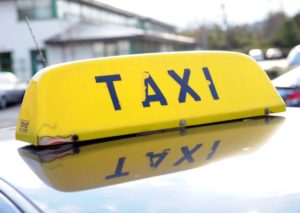 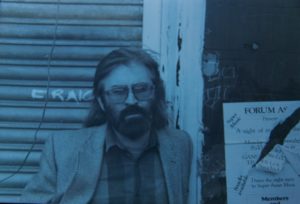 As the 80’s gave way to the 90’s, I continued to make a living as a driver on the private hire taxi firm. All thoughts of music were by now gone.  Fact is, I hadn’t played a guitar in anger in years. Then one day a friend of mine, the folk singer Rab Noakes, called me at our taxi office. He explained that he had applied for a job at the BBC and had to empty his gig diary in order to be available for interviews, training courses, etc.  Cutting to the chase, he asked if he could temporarily drive one of our taxis, an arrangement which would mean he’d have to pay us a ‘weigh in’ off what he made. I asked him if he was sure he wanted to do this, because it was an extremely tough game, but he said yes, needs must, so we gave him a car, and off he went. 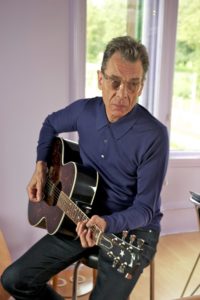 A few weeks later I bumped into him as he arrived to pay his weigh in.

‘How are you finding it?’ I asked.

‘I really thought I knew life,’ he said.

I knew what he meant, for a taxi is a bit like a bacon slicer, cutting through the surface of life, exposing hidden patterns, taking you to places that you would never otherwise have dreamt of going.

Glasgow is a hard city. Its inhabitants learn young just how to survive, and if you drive a taxi, you’re going to meet a variety of very successful survivors. One night I picked up four young men, who asked to go to Castlemilk, then a big council estate on the outskirts of the city, above the winter snow line. 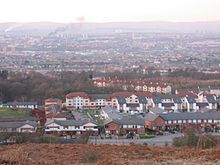 The leader of the pack had red hair, and a scar that elongated his mouth to the lobe of his ear. He was not the oldest, but he was the alpha male, and so he got into the front passenger seat. There he sat sideways, his right arm resting on the back of my seat, and quite suddenly, almost out of my field of vision, he began to make little unexpected movements, obviously designed to un-nerve me. In this, I have to admit, he was successful, but as survival in these situations depends upon showing absolutely no fear, I managed to hide my reaction. When we got to where we were going, however, it turned out that this wasn’t a simple drop off, but more likely a trawl through some very rough streets for drugs. Two of the backseat boys got out, leaving me in the darkness with one directly behind, out of sight, and their psycho leader up front. Not the most reassuring situation, I think you will agree.

As Connolly has once remarked, you only have to be five nine-ish to get called ‘Big Man’ in Glesca.

I began to flick through my box of cassettes, trying to think of something that might defuse the situation. Then a bulb glowed above my head.

‘How about Eric Clapton?’

He looked at me, askance as I slid the tape in.

By this time I was fast forwarding, looking for the track.

‘No’ got any hip hop, buddy?’ This from the back seat.

I hit play and like some expert DJ, miraculously I got the start of the track.

‘Cocaine…’ wailed Eric, ‘all around my brain…’

‘I’ve been known to,’ I lied, praying silently that that wasn’t what his buddies were out there trying to score.

But it wasn’t just the low life clientele that made taxi-ing a bacon slicer.  We had the contract to provide cabs for the biggest daily redtop in Scotland, and believe me, that was a real eye opener.

As is often the case with the Fifth Estate, many of its representatives had a symbiotic relationship with the rash of down market pubs that thrived in the shadow of its riverside office block, so on any day of any given week, you would see a line of our cabs parked outside these hostelries, waiting patiently to transport reporters on jobs which often involved scouring yet more pubs for ‘all human life is here’ stories. Among their number was an ex music journo, now grown into a fully paid up member of the legitimate press, whom I knew from my past life connection with rock’n’roll. I will call him ‘Tom’, for though the average life expectancy on the news desk was then forty two, which undoubtedly means he is dead, he may well have offspring somewhere who might just possibly recognise him from the scanty details I shall now provide.

One night, I got a call to pick ‘Tom’ up from the nearest pub to the back door of the paper, and when I went in to get him, he greeted me like a long lost friend, and offered me a drink. I accepted a coke, and sat there as he began to reminisce about bands we had known, muso stories that are entertaining only to those partaking of beer, or in his case, whiskies, doubles of course, two of which quickly disappeared as I sipped at my coke.  Perhaps I should explain that I was now on ‘waiting time’, because I had made contact with the fare, and it was up to him to decide where and when we went.

‘So,’ he said, throwing back one last large Glenfiddich, ‘we’re off to Paisley.’

In the car, he began to tell me the nature of the story he was on.  A car crash somewhere in the North of England had left two little girls badly injured, and we were heading for the grandparents’ house, where he would attempt to doorstep the poor couple and insinuate himself into the family home. The fizzy coke came back up on me suddenly, but then I’ve always had a slightly queasy tummy. I managed to change the subject, rolling him back into the old rock days, which he seemed to genuinely miss, though given his present errand, this was perhaps understandable. As we drove down the motorway, it transpired that he was due up on three separate drunk driving charges, and there was talk on the paper that he might have to go on some sort of ‘curer’ to dry out for a while. It occurred to me that the whisky was perhaps in the nature of a shower that an abattoir worker would need to take before being allowed into decent company. Or was it just an anaesthetic prescribed to kill the pain that surely must wake him from the deepest of slumbers?

I saw the nylon curtain move as he pushed back the gate of the small semi-detached. He knocked and the door opened, and amazingly he was let in. But why? Why would any normal person, struck by such a tragedy let someone like him into their house? Was it some form of communal madness that stopped us seeing the filthy rag he worked for as anything more than a vile, gossip ridden crock of shit? Or was I alone in thinking this? Was I the odd man out? But there again, I was taking money for driving him here, enabling him to do his devilish work. The coke came back again, this time with the taste of guilt on it. Minutes ticked by slowly and then the door opened and out he came, waving his goodbye as he sauntered down the path. As he stepped into the car, he clenched a fist in triumph, and held up his trophy; a photo of two little girls.

In the months that followed, I’d get the odd report of him from drivers. He’d lost his licence, was lucky to stay out of jail; then as expected got sent off to a rehab to dry out. But back on the street, the first place he headed for was the boozer’s, so soon it became common knowledge that he was for the high jump, an almost unknown occurrence in the world of the Tabloid Press.

Then, as he was serving his notice, there came a most unexpected reprieve, in the form of a prison siege in rural Perthshire. Sensational stuff, made even more newsworthy by the fact that the leader of the riot that had led to the siege informed the Authorities that he would speak to only one man, and that the siege might end badly if this representative of the media was not brought immediately to hear his demands. So it was that ‘Tom’ was dragged from whatever bar he was drowning his pre-sacking sorrows in, plied with bounteous cups of black coffee and driven at speed with a photographer in tow to the scene of the crime. There he was handed any reporter’s wildest dream, an ongoing exclusive national story, complete with graphic photos of the physical aftermath of the riot, and all because he had at some point got pissed with the main perpetrator of this mayhem. Three days of headlines issued from his pen, and naturally the grounds for dismissal were quickly revised, which was just as well, for a few months later, he won the award for Scottish Journalist of the Year. This got him a year’s reprieve, but when all the fuss had died down, they gave him the boot, exactly as planned.

And so the years slipped by un-noticed as I sat behind the wheel, my Forties spent as waiting time, out there in the car, reflecting on what might have been had I been less headstrong and foolish, all the time dreaming of escape from the never ending grind of traffic and low life, like the Count of Monte Cristo on wheels. But on the other hand, it gave me lots of time to read, and learn, and eventually to write.