Chapters 1 through to 13 of Heartfeeder can be found in the  Band News section of this website.

I am pleased to say that I have managed to retrieve about another 50 pages of stuff, some of which is dynamite.

There is, however, a slight gap in recorded events at the end of 1972 so, before going back to Chris’s words in my next post, I will summarise the gap for you. 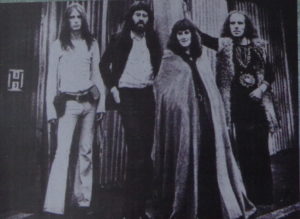 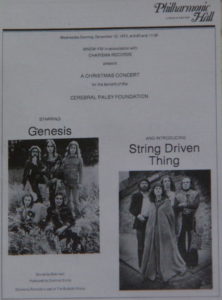 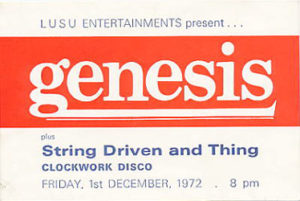 1972 was proving to be a pivotal year in the development of the band and it finished with a trip to USA where the band supported Genesis who were debuting their Foxtrot album in New York.  This was only a few days after being mistakingly called “String Driven and Thing” at a student union gig.  In travelling to USA, Pauline, of course, famously had to carry Peter Gabriel’s dress in her luggage in order to avoid any possible embarrassing problems at Customs.  Highlights of the trip include hearing Circus being played on the taxi radio as the band were driven from the airport into the city that never sleeps.  There is also a story about Chris meeting Lou Reed in the record company’s offices but, regrettably, the full details were not written down.  I had intended to sit down at Chris’s bedside to try and fill the gaps in his memoirs but he passed away before this could be carried out.  The gig at Philarmonic Hall was a prestigious charity affair for Cerebral Palsy Foundation and String Driven Thing’s outstanding performance resulted in them being brought back on stage for a rapturous encore.  All was looking good for the band as the approached 1973 when they would continue to support Genesis on their UK Tour with the opening gig set for early February at The Rainbow in London.

Appearances can be deceptive as you will find out when I next post with Chris’s own words.